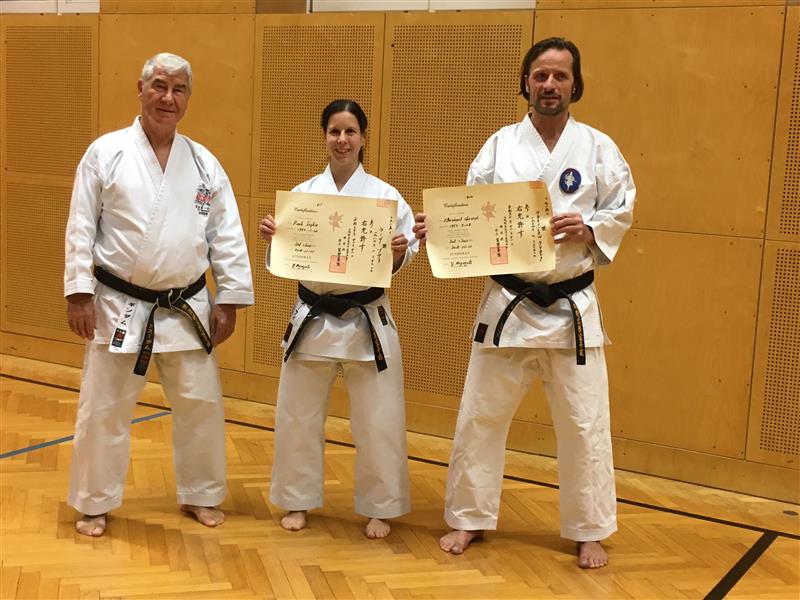 International Gasshuku in Naha/Okinawa in November 2018

This year the Gasshuku was held in Naha, caused by the 65th anniversary of the founding of the Jundokan by Miyazato Eiichi Sensei. It was really a great event, organized at the Kaikan, the brand new building for Budo in Naha.

24 Austrians attended the Gasshuku, 11 from our club Jundokan Karate-Do Austria. Two of us, namely Sophie Raab and Mag. Christoph Kleinhansl passed the grading for Sandan successfully in a very  impressive manner.

Again it was great to meet all our friends from all over the world, indeed from all 5 continents of the world.

But beside of the Karate event it was also very impressive again to visit some of our well known places of Naha like Kokusai Dori, the harbour, Haiwa Dori, Shuri Castle, Ryu–Bo tower, the beach, etc., etc.
And we were very impressed by seeing and hearing the aircrafts of the US Army like F-16 and  helicopters stationed in Okinawa.

To live in Naha is, comparatively speaking, relative cheap. As well the apartment, organized by a comrade of the Jundokan, as the food and drinks were not expensive.

The training has been performed mainly at the Jundokan Honbu Dojo and at the Kaikan. So everyone had enough time and the opportunity to train in groups or together with a partner and to prepare for the grading. The grading itself was held in the Jundokan dojo; the performances have been really impressive.

Back home we are continuing the training in our dojos. The students, who have not been in Okinawa, will be best informed about our new experiences.