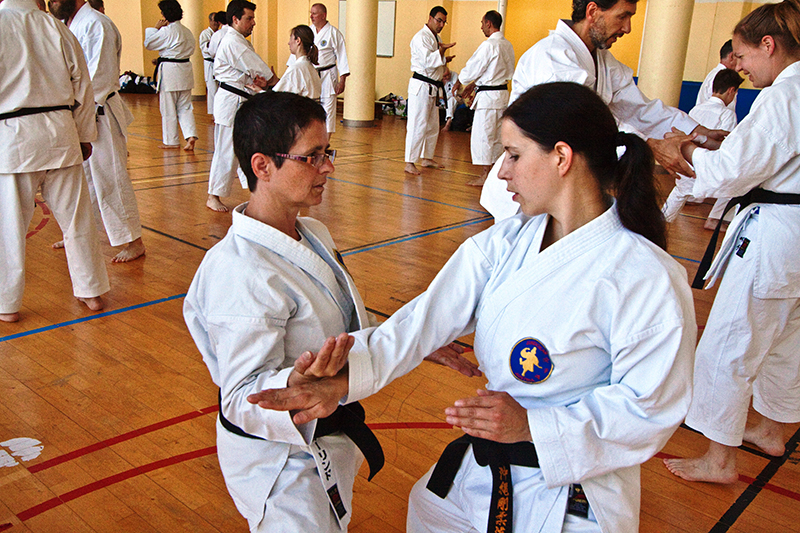 Claudia Diewald, Ing. Rudolf  Zampa and Gerlinde Hartinger are not only successful in Karate but also in their private and professional live.

She has attended the Höhere Lehranstalt für wirtschaftliche Berufe HLW  in Hollabrunn and has passed the Matriculation Examination on 17th  June 2016 successfully. Now she is going to study jurisprudence in Vienna.

Claudia began with her Karate training in spring 2012 and she has passed the grading  for 3rd Kyu on 27th of June 2016.

Congratulation to this performance.

Rudolf Zampa was born in 1960 in Vienna. He is a quality manager in the automobile industry and performs  Karate since 1981. At this time he holds the

In 2015 he founded his own Jundokan Karate Club in Rannersdorf  nearby Schwechat in Lower Austria. Within the Jundokan organization he is head of a “cooperation dojo”.

Gerlinde Hartinger was born in 1965 in Vienna and performs Karate since 2005. At this time she holds the Nidan of Goju Ryu Jundokan and has passed her grading at the Gashuku in Sicily.

She is the treasurer of the para military karate club HSV-Vienna, member of the Vienna Karate Federation. She has been educated by the Austrian Karate Federation to be an instructor assistant. Gerlinde took part in the Jundokan Gashukus e.g. Oinawa, Paris, Great Britain and Portugal etc.

Beside Karate Gerlinde has had a fascinating hobby for 35 years: horse riding. She is owner of an English thoroughbred horse called “Celtic Storm” with the nickname “Stormy” which is a very impressive horse. Its colour is chestnut and its age is 7 years. It is trained for dressage purposes.

The photographs give you an impression of the performances.